July 01, 2010
We were in Madrid from May 12-16, which turned out to be a very exciting time to be there. We arrived the night Atletico Madrid won the European Cup in football (soccer in the US). We stayed off Gran Via, the heart of the city, and all around us cars honked, people shouted, waving flags out of windows, running down the street in jerseys and Atletico Madrid colors, it was pandemonium, or shall I say, fiesta!

Before I came to Spain, I greatly underestimated the significance of fiesta-in Spain, fiestas involve parades, all night parties (I'm talking coming home at 1 in the afternoon the next day), stages in the street, costumes, and firecrackers in abundance. Also, of course, dancing and liberal amounts of alcohol.

So we arrived on the cusp of not one, but THREE fiestas. Celebrating the Atletico Madrid victory, celebrating 100 years of Gran Via, and celebrating the day of Madrid's patron saint San Isidro on May 14. That day, Gran Via was blocked off and swathed in blue carpet. Crowds were immense and many dressed in traditional costumes. We saw several little girls in what we could have sworn was the same pink and white jumper-like dress. Stages were set up, and we watched Argintinean tango for a while, then backed out of the crowds and ran into a group of older dancers doing traditional Madrid song-and-dance with outfits to match. It was glorious.

Other highlights of our stay in Madrid including running into several book fairs (I badly wanted some beautiful leather volumes of Don Quixote, but they would not have fit in my backpack), various flea markets including the somewhat notorious El Rastro (our pension hostess warned us of thieves, as did all websites and guidebooks, we took care and were not robbed), and a statue of Don Quixote and Sancho, that we meant to return to and photograph and never did. 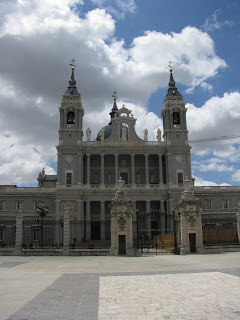 The Bear and Tree (Oso y Arbol), the symbol of Madrid. 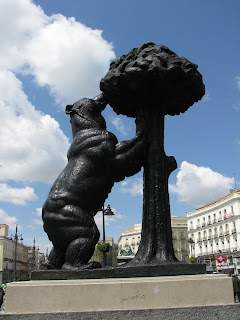 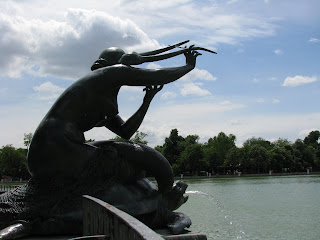 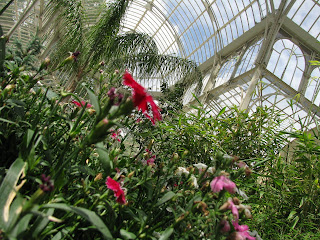 Argentinean tango that we watched from the crowds at Gran Via. 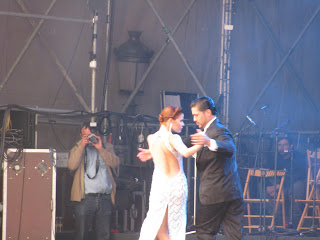 Madrileno dancers and a couple from the crowd joining in! 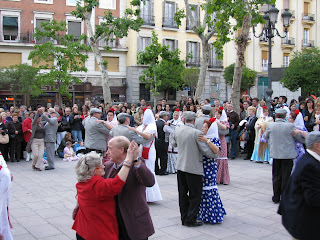 Thoughts on Reformist vs. Revolutionary Feminism

June 03, 2011
In Feminism is for Everybody , I was struck by hooks' sharp differentiation between reformist and revolutionary feminism. If you read the passages below, you can see that hooks identifies herself as one of the revolutionary feminists, whom she refers to as "we," while she refers to reformist feminists as "them." Certainly, hooks makes a salient point when she recognizes that achieving the goals of reformist feminists has not ended sexism. One of the complaints of anti-feminists is that women are trying to be like men, what hooks says of the reformist feminists. Revolutionary feminism, as I understand it at least, would change the system so that there is no longer this perception of women trying to be like men-women are trying to be women, are trying to be people. It is these artificial men/women roles that are the problem, in my mind. And these roles result from what hooks is fighting against, a patriarchal society, a hierarchy of domination. Let's take away
2 comments
Read more

October 20, 2013
28. Sexy Feminism by Jennifer Keishin Armstrong and Heather Wood Rudulph A couple years ago, I wrote a post entitled Thoughts on Reformist vs. Revolutionary Feminism , based on bell hooks' Feminism Is for Everybody . Since then, it's been one of the most popular hits on the blog. It seems that a lot of people are wondering, what is the difference between reformist and revolutionary feminism? I don't have all the answers or know all the history. But, in my understanding, "reformist feminism" aims to give women equal rights to men, as applied in Western democratic, capitalist societies. Reformist feminists are the advocates of equal pay and of more women in CEO positions and STEM fields. Sheryl Sandberg of Lean In and even Betty Friedan of The Feminine Mystique would be considered reformist feminists. these women are aiming to increase women's presence and power in the workforce, aiming to treat women exactly (or almost exactly, save the contentious mothe
1 comment
Read more

Space Station Mir
United States
@SpaceStation_M on Twitter. miriamreads_andbakes on Instagram. I'm a reader of all books,especially SFF and #ownvoices. Besides reading, I like to write, bake, and spend time with my husband and our dogs (@janewayeatsbooks on Instagram).